U/Pb dates are being collected from the mass spectrometer. Below are some photos of how the samples are loaded for analysis as well as a photo of the analyzing screen.

After the U and Pb are extracted from column chemistry, it gets dried down and moved into the mass spectrometry lab. A couple drops of silica gel are used to re-dissolve the sample and then transfer that with a little spaghetti tube to a rhenium filament. After the liquid dries own on the rhenium, twenty filaments get loaded into a turret and then into the mass spectrometer.

Once in the mass spec, everything is computerized. The temperature of the filaments for ionization of Pb and U is controlled. Pb ionizes at a lower temperature (~1180-1200˚C), so that gets run first. Then the U is run (~1350˚C). The mass spectrometer detectors are basically counting how many times they are hit by ions. In other words, it’s a giant atom counter. Each Pb-U pair takes about 4 hours to run. Once data is generated, the values are entered into a spreadsheet. The spreadsheet uses the ratios of the isotopes of Pb and the isotopes of U to calculate an age. It also calculates the amount of “common Pb” picograms. Effectively, this is how much Pb is not from radioactive decay, and it’s a measure for how “clean” your lab protocols are. The smaller the number, the better! The spreadsheet also calculates the amount of Pb* in picograms. This is the amount of radiogenic lead that has accumulated from decay of U. In this case, it is better to have lots of radiogenic Pb – it makes it easier to measure. Some of the Black Rock Desert samples only have 40 to 50 FEMTOgrams of lead. That’s tiny! And of course, you want your radiogenic Pb to be much higher than your common Pb. 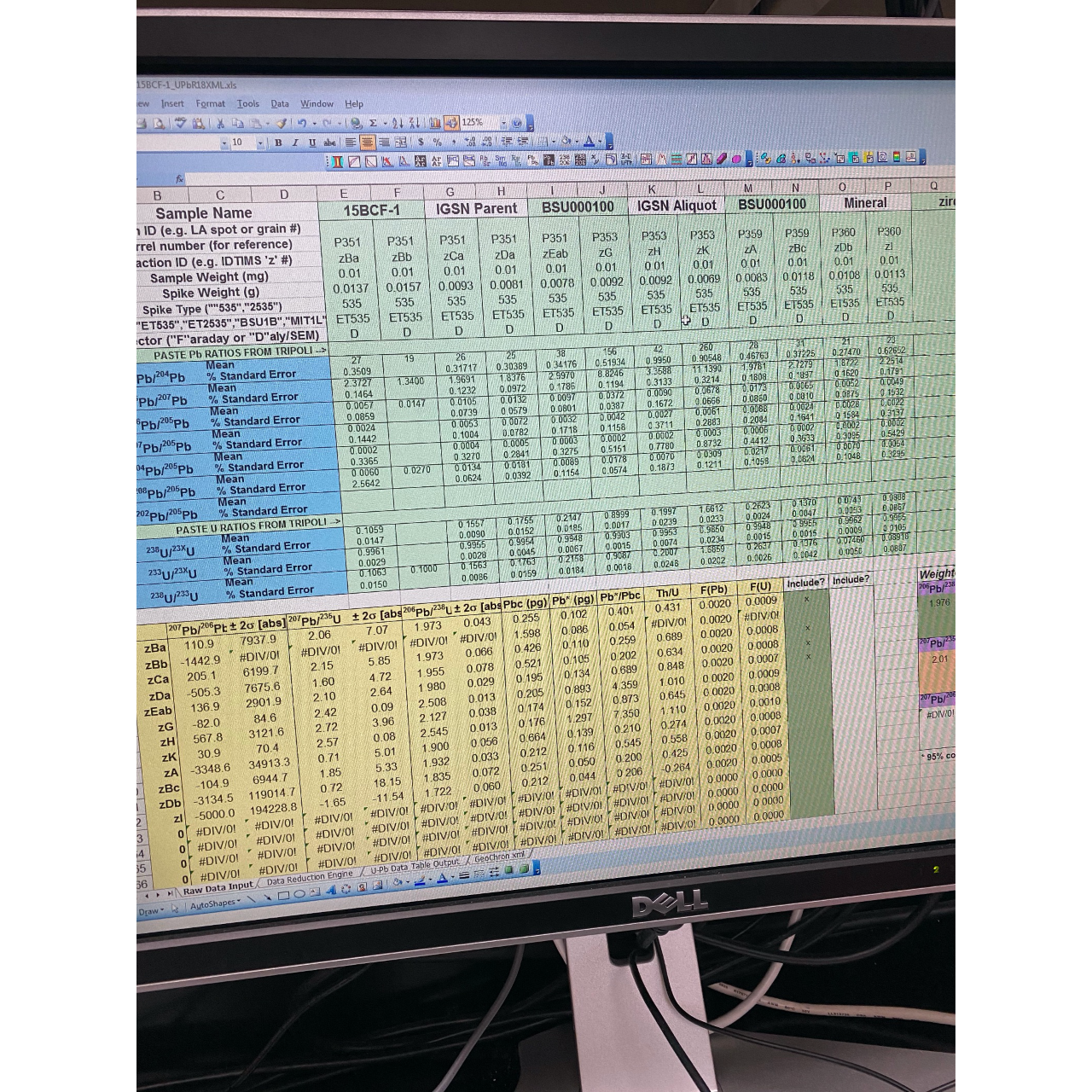 And this is the real challenge of trying to date young zircon crystals. They are commonly small in size, and there hasn’t been a lot of time to allow for the decay of U into Pb to get a lot of accumulated Pb*. So you end up with really small values that are dependent on how clean your technique is. This sample, however, actually turned out pretty good, but has a spread of dates for the zircon crystals that we analyzed. This is where interpretation now comes into play. What do you think it means to have one rock preserve zircon crystals that have dates ranging from 2.5 to 1.7 Ma?